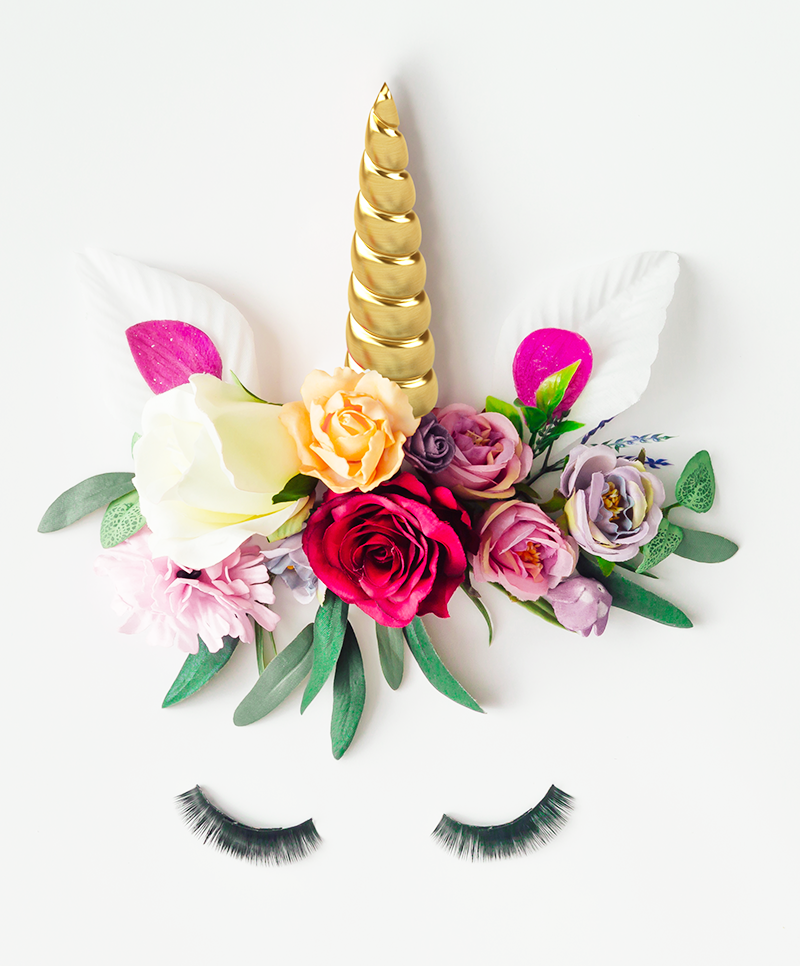 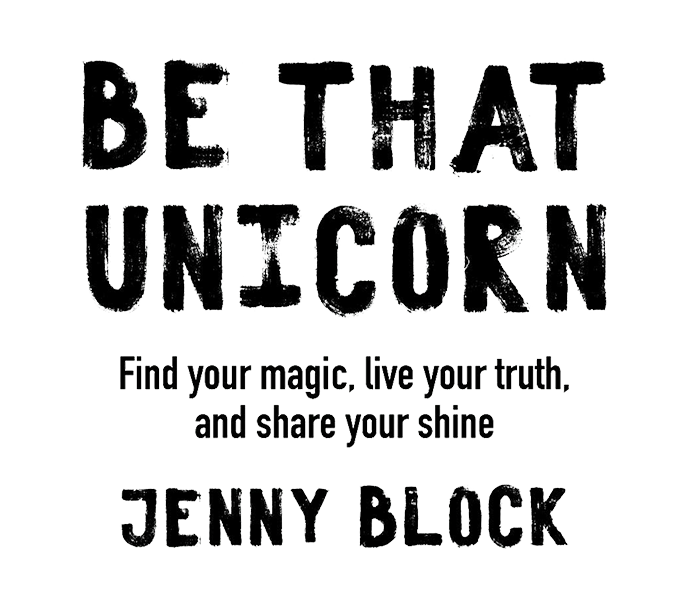 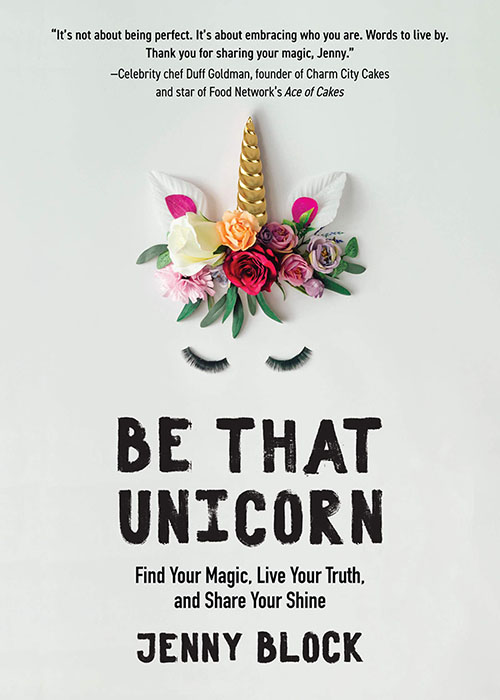 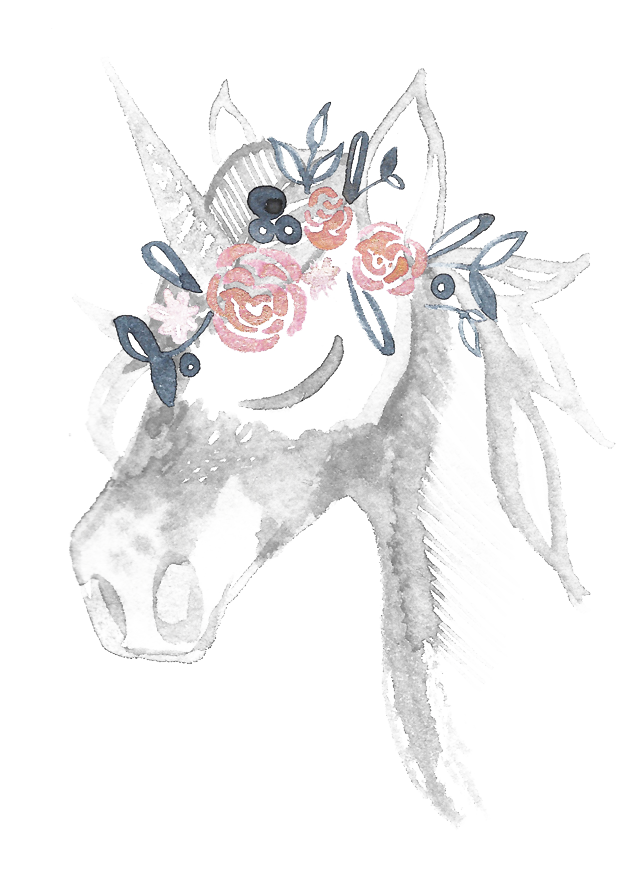 GET YOUR COPY TODAY

Being That Unicorn means being the magnetic person that everyone in the room is drawn to. It means being honest and true to yourself every day, no matter what. When you are really, really good at being yourself, you’ll make other people feel really, really good about themselves, too. In Be That Unicorn, Jenny Block, author of several best sellers for women, shows you how to stop putting yourself down and start finding your magic.

From BTU – “That Unicorn is the best you. That Unicorn is a glittery, rainbow-maned metaphor for one’s joyful self…the kind of person we are all drawn to. That Unicorn  is you. My mom has always said that people are drawn to me because I make everyone feel good about themselves. Throughout my life, people have echoed that sentiment. It’s the thing I love about myself the most: I’m the big sister, the BFF, the mom, the cheerleader, the coach…“the little unicorn that could” who everyone deserves.” 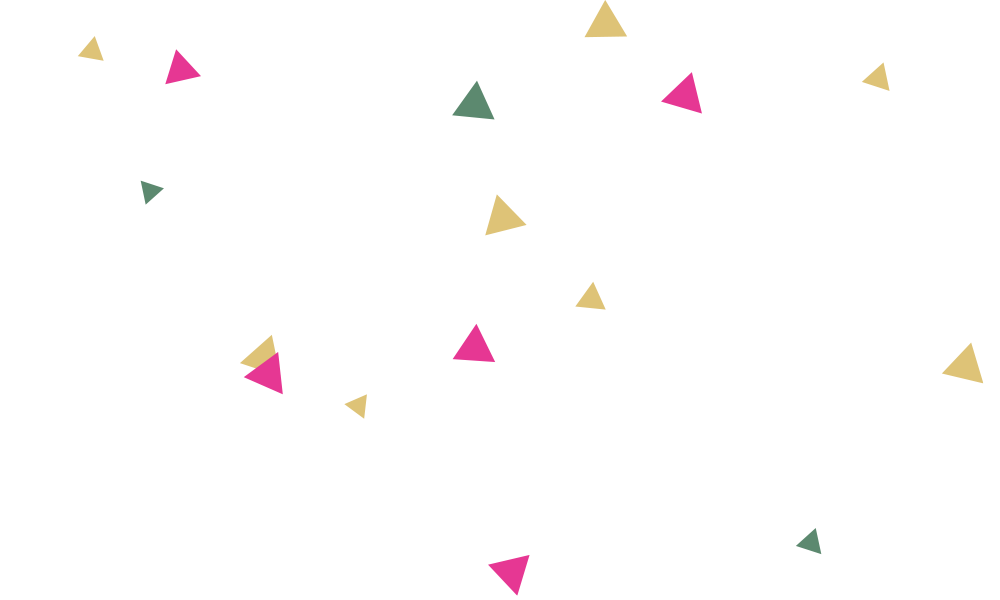 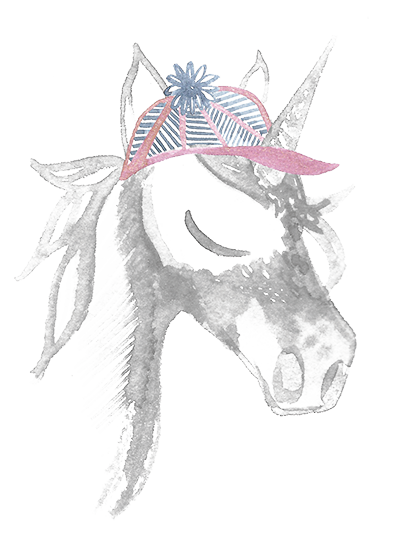 What Others Are Saying

“I’ve known Jenny for a while, and she’s always been an awesome and inspirational friend. She brings a magical energy to every room she’s in and people notice. Be That Unicorn reveals her journey of becoming her authentic, wonderful self. It’s not about being perfect, it’s about embracing who you are. Words to live by. Thank you for sharing your magic, Jenny.”
―Celebrity chef Duff Goldman, founder of Charm City Bakery and star of Food Network’s Ace of Cakes
“What the world needs now isn’t more so-called influencers selling us shallow dreams and superficial advice about who or what we should be. We need Jenny Block and Be That Unicorn, her wry, insightful, poignant and hilarious guide to discovering and harnessing the magic that lives inside of all of us and that, when unleashed, allows us to be our very best―and most authentic―selves.”
―Noah Michelson, editorial director of HuffPost Personal
“Be That Unicorn is an engaging and delightful handbook that validates authenticity as the ultimate life ethic. No matter what avenue of life needs attention, Jenny Block offers pragmatic mementos that the reader can bookmark and return to, again and again.”
―Marcie Bianco, PhD, editor of the Stanford Social Innovation Review, Stanford Center on Philanthropy and Civil Society
“Sometimes being a unicorn is lonely. After all, we’re pretty unique creatures. We’re smart and sassy and fun and, well, weird! The trick to BTU is embracing our weirdness (it’s our magic after all) and finding our band of other spectacular unicorns. Jenny Block teaches us all how to embrace our inner unicorn, let our magic shine, and find our herd. And remember, the best brown horse can win the Kentucky Derby, but he’ll never be a unicorn!”
―Desiree Asher, philanthropist, technologist, unicorn
“I love knowing that I am That Unicorn! Jenny inspires me to be an honest, fun, and accountable leader, mom, wife, and friend. This book is a valuable guide to have by your side as you make the tough calls, keep the culture positive, and take a little time to reflect on your own inner unicorn.”
―Carrie Welch, cofounder of Feast Portland and Little Green Pickle

“It’s a perfect time for a book that helps you embrace your inner unicorn. Jenny is an incredible storyteller and leader that aims to inspire her readers to unleash their magic in a very authentic way. And Be That Unicorn is the guide we have all been waiting for because it’s time we stop putting ourselves down as we head into a new decade.”

―Iman Oubou, SWAAY Media Founder
“Be That Unicorn has a lot of valuable tips, that even That Unicorn may forget sometimes. It’s a good read that everyone should have the pleasure of picking up. It’s lighthearted, informational, and really, really well written to feel as though you’re having a conversation with Jenny! It’s actually quite therapeutic in that sense. Being a trans woman, transforming into That Unicorn is a process, but one that showed me it’s okay to live for myself as myself. Loved it!!”
―Maddie Whitley, trans model and activist

“Jenny Block encourages us to get in touch with our messy, brave, ambitious, glittering inner-rainbows…can there be a more noble pursuit?”

Fair is fair, Thomas. So what’s it going to be?

Sad today. Angry till the work is done.

Now THIS is leadership. THIS is what every CEO sho 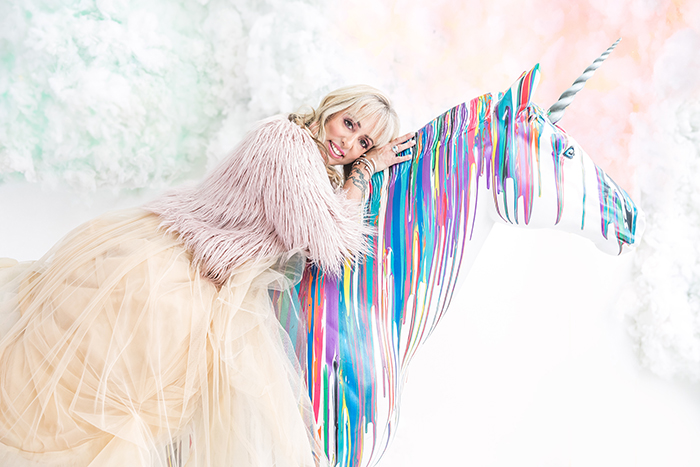 Jenny Block began her career in words teaching college English in Virginia. Before too long, she found herself writing articles and books about everything from art to rock climbing to finding love. After that came radio and television appearances, as well as speaking engagements at universities, at museums, and even on cruise ships.

She has traveled the world and has had the pleasure of meeting and working with all kinds of people from all kinds of places doing all kinds of things. That’s when she discovered her magic-bringing out That Unicorn in all of us. Now, Jenny spends her time and her words living her truth and sharing her shine on a lake in Nowhere, Texas with her wife Robin and her two dogs: Chihuahua-terrier Walter and Chihuahua-Dachshund Aurora.

Jenny has appeared on a variety of television and radio programs, including Nightline, Fox and Friends, The Glenn Beck Show, The Tyra Banks Show, Good Morning Texas, The Morning Show with Mike and Juliet, FoxNews.com, Playboy Radio, The Alan Colmes Show, The Young Turks, and BBC Radio, as well as on HuffPost Live, the HuffPost Sex and Love Podcast, and HuffPost’s first ever, free-standing multimedia project.

She holds both her BA and her MA in English from Virginia Commonwealth University and taught college composition for nearly ten years.

Her work has been was written up, reviewed by, and discussed both nationally and internationally in and on a variety of publications and sites, including Publishers Weekly, Library Journal, Glamour, San Francisco Chronicle, Baltimore City Paper, The Guardian, WOW-WomenOnWriting.com, Marie Claire, Curve, The Dallas Observer, Observer UK, Maxi (Germany), Psychologies (UK), NPR’s Morning Edition, feministing.com, San Francisco Chronicle, New York Daily News, 2: The Magazine for Couples, wow-womenonwriting.com, and the Baltimore City Paper.